Cypress College’s 39th Annual Americana Awards appear to be one of the most-successful events on record — thanks in large part to the participation of Chargers alumni Swen Nater and Mark Eaton. They were honored as the Men of the Year at the ceremony, which were held on Saturday, February 22, at the Disneyland Hotel. 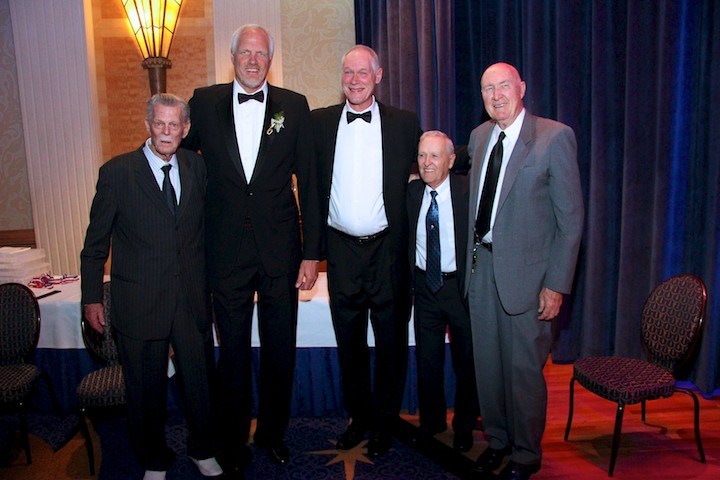 The previous night, the pair of NBA record holders stood with their former coach on Don Johnson Court to see their jerseys retired at our first “Legends of Hoops Night.” Coach Johnson was also recognized for his recent induction into the UCLA Athletics Hall of Fame.

Both events highlighted the success of the two alumni, as well as the efforts of their coaches to help them fulfill their potential. Neither Nater nor Eaton were playing basketball when Chemistry Professor Tom Lubin spotted and recruited them to the team, on which he was an assistant to Johnson. Nater, an immigrant from Holland, had never played the sport, while Eaton gave it up after becoming disillusioned in high school. Before becoming standouts in the National Basketball Association, both men furthered their education at UCLA as a direct result of Johnson’s efforts, with Nater playing for the legendary John Wooden.

Also honored at Americana were Irv Pickler and Mary Bouas who both received the President’s Distinguished Service Awards. Both are long-time Foundation Board Members. Pickler is the father of Scott and Brad, the College’s baseball and softball coaches, respectively.

In closing the awards, Nater delivered highlight lines, referring to the “Spirit of Cypress” while lauding employees, classmates, and recalling significant events during his time here at the College.

It was a fitting bookend for an evening that opened with a rousing salute to first responders, and honored eight Citizens of the Year from the cities in the college’s primary service area.

Initial projections show that the event will generate a net outcome of approximately $125,000 — a 9.6% increase over last year’s event. If the projection holds, it would be the second-highest net revenue in Americana’s 39-year history.

Also of note was Union Bank’s announcement that they are extending their title sponsorship of Americana an additional three years. The company’s commitment comes largely through the work of two executive leaders who are both Cypress College alumni. In addition to Union Bank, the College also received generous support from the event’s three Patriot sponsors: Forest Lawn Memorial-Parks and Mortuaries, Disneyland Resort, and Yamaha Motor Corporation, USA.

“I could not have been prouder of our achievement in bringing this most extraordinary event together,” Dr. Simpson said. “I especially want to thank (Americana co-chairs) Jenelle Godges and Dave Shawver for setting the standard of excellence so high with their leadership and support of Americana. To those whose efforts are not so obvious but equally important, from soliciting donations to making the phone calls to coordinating silent and live auctions, to… THANK YOU. An event of this magnitude, quality and significance can only happen when each member of the team contributes to the fullest.”