Sandra Hutchens, Orange County’s highest-ranking law enforcement officer, has been selected by the Cypress College Foundation as 2015 Americana Awards Woman of the Year. 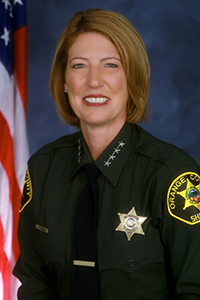 Orange County Sheriff-Coroner Sandra Hutchens is the 2015 Americana Woman of the Year.

Hutchens became the first woman to serve as the county’s Sheriff when she was appointed by the Board of Supervisors in 2008. Two years later, she was elected for her first full term. She began her law enforcement career as a secretary for the Los Angeles Sheriff ’s Department and worked her way up the ranks.

The 40th Annual Americana Awards take place on Saturday, February 28, 2015, in the Grand Ballroom of the Disneyland Hotel. In addition to the Woman of the Year, the Americana Awards honor Citizens of the Year from the eight communities in Cypress College’s primary service area.