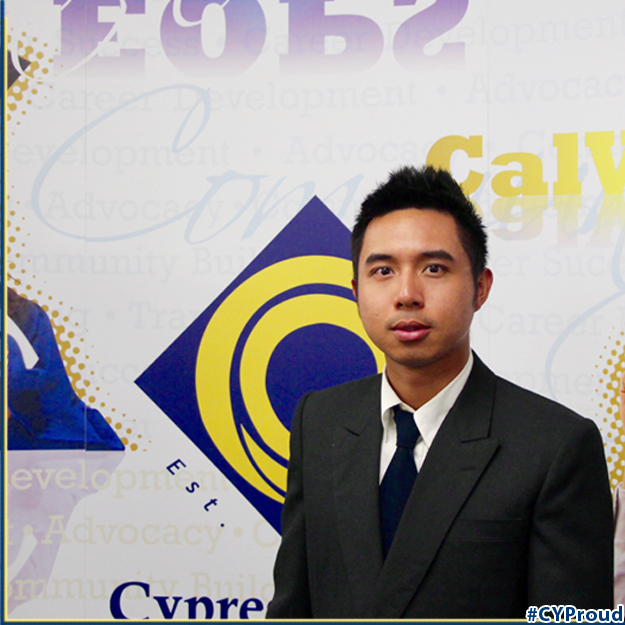 Meet Austin – a Hotel Management & EOPS graduate of the Class of 2015.

Austin will be transferring with a 4.0 GPA to Cal Poly Pomona where he plans to major in Hotel Management and minor in Spanish.

Austin was nominated by a Cypress College faculty member as an inspirational graduate of the Class of 2015. We asked Austin to tell us a bit about his background and future plans:

Why Cypress – When deciding where to study, he asked an important question: “Which school will allow me to transfer to a top-tier, four-year hotel management program?” He did his research and decided that Cypress was the best because of its high transfer rates to the prestigious Hospitality Management program at Cal Poly Pomona, Collins College.

Origin Story – Austin came to the U.S at the age of 20 from Saigon, Vietnam. In the six years since, he has worked many different jobs – at a Vietnamese restaurant, at the Hyatt of Huntington Beach, as a Cypress College EOPS student advisor, and even as a trash man at Knott’s Berry Farm. In 2012 he enrolled at Cypress College in the ESL Program. He is grateful for the opportunities the U.S. and Cypress College have provided both him and his family.

@Cypress – Austin was an active leader within the EOPS program. In addition to serving as a student advisor, Austin was selected as an EOPS representative to advocate on behalf of the program in Sacramento. There, he spoke with several state legislators and explained the different demographics within EOPS as well as the need for continued financial support. Austin also brought to the program his excellent command of digital production techniques to digitize the EOPS newsletter. For his academic excellence and campus leadership, Austin won several scholarships from the Cypress College Foundation and the Hotel Associates Program.

Fun Facts – Austin speaks Spanish fluently! He learned via the Spanish Consulate in Vietnam where he worked in tourism. He also speaks quite a bit of sign language, which he learned here on campus at the School of Continuing Education. His personal goal has been to better connect with and serve the needs of the deaf community. He finds meaning in bridging divides.

Advice to Future Students – “Study and grow yourself. Take full advantage of the resources on campus – there are a lot! Also, over the winter and summer breaks choose to be proactive. I would read all my of my next semester’s course books in advance. That was critical to my success as an ESL student. Find the community that fits you and feels comfortable. Be inspired; create an emotional connection with the campus. Do more than just study.”

Congratulations, Austin! And best of luck at the Collins College of Hospitality Management at Cal Poly Pomona.