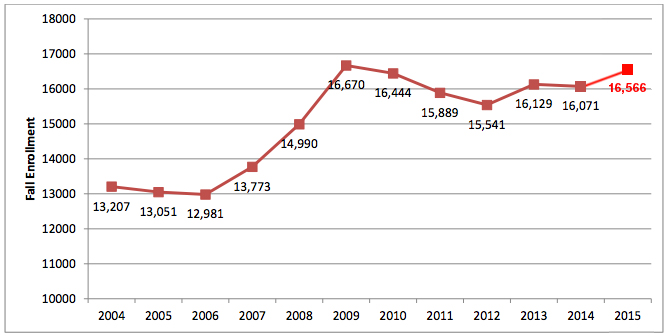 This chart shows fall-term enrollment at Cypress College. The current student body is the second-largest in campus history.

This is the second-largest student body in Cypress College’s nearly 50-year history.

A near-record 16,566 students were enrolled in classes on the first census day. That is just 104 students shy of the College’s all-time high. It is also 1,294 more students than were enrolled at the same milestone in the spring semester. The initial figure may fluctuate slightly, but is safely ahead of the 16,444 students who attended in fall 2010.

First census is an important milestone since it establishes official enrollment in a course and is the point in the semester from which the state derives benchmark enrollment figures.

Fall enrollment is 94% of capacity, Dr. Bob Simpson reported to the North Orange County Community College District Board of Trustees on Tuesday. The College also is on track to meet its enrollment targets, he told the Board.

“These figures represent a concerted College effort lead by Executive Vice President Santanu Bandyopadhyay and his Enrollment Management Committee that have used enrollment data and institutional planning to attract students in a climate of decreasing demand for classes,” he said.

In fall 2009, Cypress College had an unduplicated student count of 16,670 at first census. State budget cuts in subsequent terms precluded the College from expanding on that record enrollment.

While keeping students enrolled through census is an important step for the College, the goal is to foster student success through course and program completion, Bandyopadhyay noted.