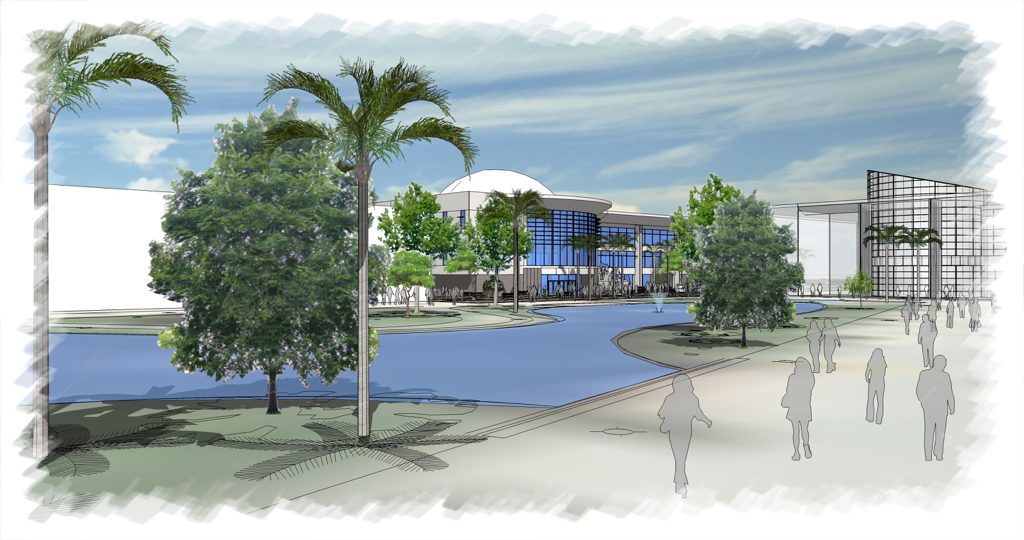 An artist’s rendering depicts what a new Science, Engineering, and Math Building might look like. The new facility was approved by the NOCCCD Board of Trustees last wee as part of the Measure J program.

A brand new Science, Engineering and Mathematics Building will replace the existing facility. The decision to start from scratch rather than conduct a full remodel was approved by the Board last Tuesday when Trustees reviewed a study comparing costs for the two options.

Providing modern facilities to support the sciences was a top priority of voters when they approved Measure J in 2014.

“I believe this decision is one of the most significant and positive actions taken by our Board during my time in the District,” said Cypress College President Dr. Bob Simpson, who then addressed his two primary themes in communicating change to employees. “When I consider ‘Dream Big Dreams’ and ‘Do Big Things,’ this is what I am talking about.”

The decision facilitates the construction of a state-of-the art facility that will not be constrained by the existing building’s footprint and unalterable interior concrete walls. The current building does not meet existing student demand. In addition, the new building can incorporate both a planetarium and design features that allow for future expansion. Designing and building fully modern labs is another key benefit of starting from the ground up.

The decision came on a unanimous 6-0 vote by members of the North Orange County Community College District Board of Trustees at their meeting on Tuesday, December 8. Dr. Simpson and Vice President Karen Cant presented Trustees with the result of a study comparing the benefits of the two options, a renovation versus new construction, as well as a fiscal analysis.

Cypress College will begin planning for the new building, which will be constructed adjacent to the existing building and the Library/Learning Resource Center. Once construction is complete on the new SEM building, the existing facility will be used as swing space for the duration of the Measure J construction program. Another advantage of building a new facility is that it eliminates the need for a multi-million-dollar, temporary and disposable “science village” and for $19 million in upgrades to the the existing building to bring it up to code prior to a full renovation. It also means that expensive and delicate equipment will only need to be moved once, rather than both to and from a temporary facility.
In addition to allowing for expansion to meet current needs and for future expansion should the program continue to grow as projected, the new building facilitates stronger ties with the College’s Nursing Program and its Mortuary Science Program.