Four candidates for the vacant NOCCCD Board of Trustees seat representing Area 3 participated in a candidate forum last night at Cypress College. The League of Women Voters of North Orange County sponsored and ran the event.

The North Orange County Community College District Board of Trustees Area 3 includes major portions of Buena Park and La Palma, as well as parts of Cypress and Anaheim. A special mail-in election will be held February 9, with vote-by-mail balloting beginning January 11.

The four candidates are:

To learn more about the candidates, visit the Orange County Registrar of Voters.

The North Orange County Community College District is governed by seven elected trustees who establish all policies that guide the general operation of the District. Student trustees representing each of the colleges also sit on the Board.

For more information on the Trustee Candidate Forum, please contact Debra Vagts at the League of Women Voters of North Orange County at (714) 390-3852 or NOCCCD District Director of Public and Government Affairs Kai Stearns Moore at (714) 808-4829. 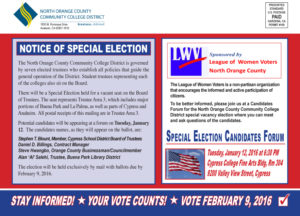