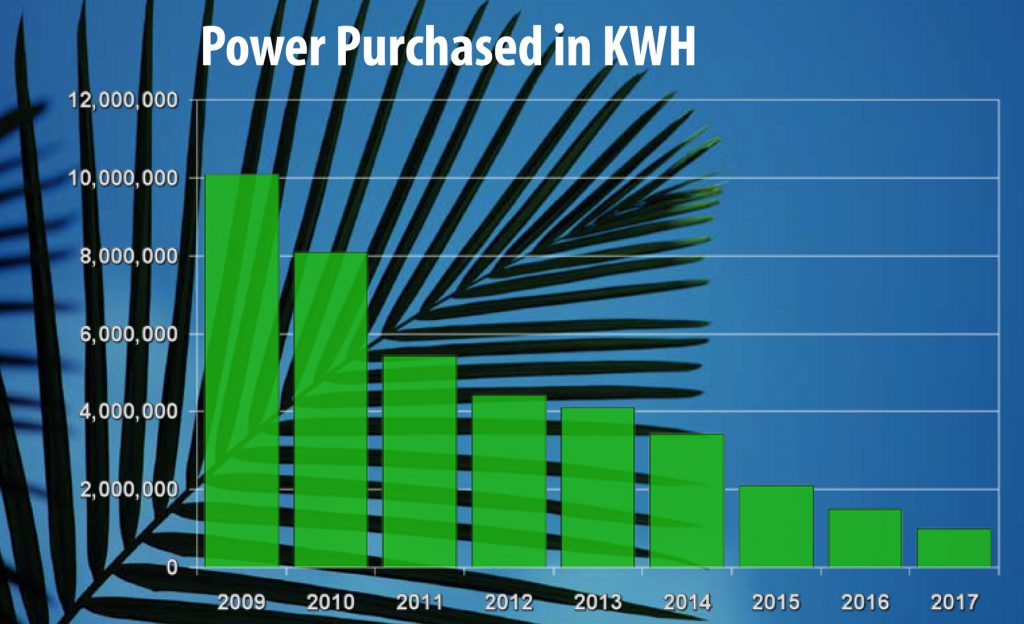 by 2017 Cypress College will lower its carbon

Those who have visited campus recently can see results of the college’s efforts to reduce overall water usage. Medians and buffer landscapes have been left to take on their natural golden hues. Overall, the college’s reduction in exterior water use amounts to a 30 percent in savings. This institutional effort was piloted even before the state’s broader campaign to respond to the region’s historic drought.

Rethinking water usage is just one part of a broader conservation plan that includes waste management, energy reduction, and emissions controls. In the coming year, construction work will begin on a thermal storage tank and chiller for the north side of campus. Plans for 2016 also include installation of the campus’ first photovoltaic solar panels. Since 2009, purchased electricity will have fallen from 10.1 million kilowatt hours to 1.5 million kilowatt hours.

By 2017, projected annual savings from energy projects will total $1,440,000. In addition, the college will have received $1.5 million in economic incentives and another $1.3 million in Proposition 39 grants. Overall, Cypress College will have reduced its carbon footprint by approximately 73,800 metric tons by 2017.

Energy Efficiency — A campus-wide lighting retrofit took place during the summers of 2014 and 2015. This extensive project is one of the main reasons Cypress College has reduced its energy consumption. The project covers both the interior and exterior of the campus, including installation of highly efficient LED lighting in classrooms, common areas, and parking lots.

HVAC — Replacement of heating, ventilation, and air conditioning systems were completed in three buildings in the past 18 months: Technical Education II, Technical Education III, and Gym 2. These projects were undertaken with the support of grant funding and help decrease energy use on the campus. A more-efficient HVAC system also improves comfort.