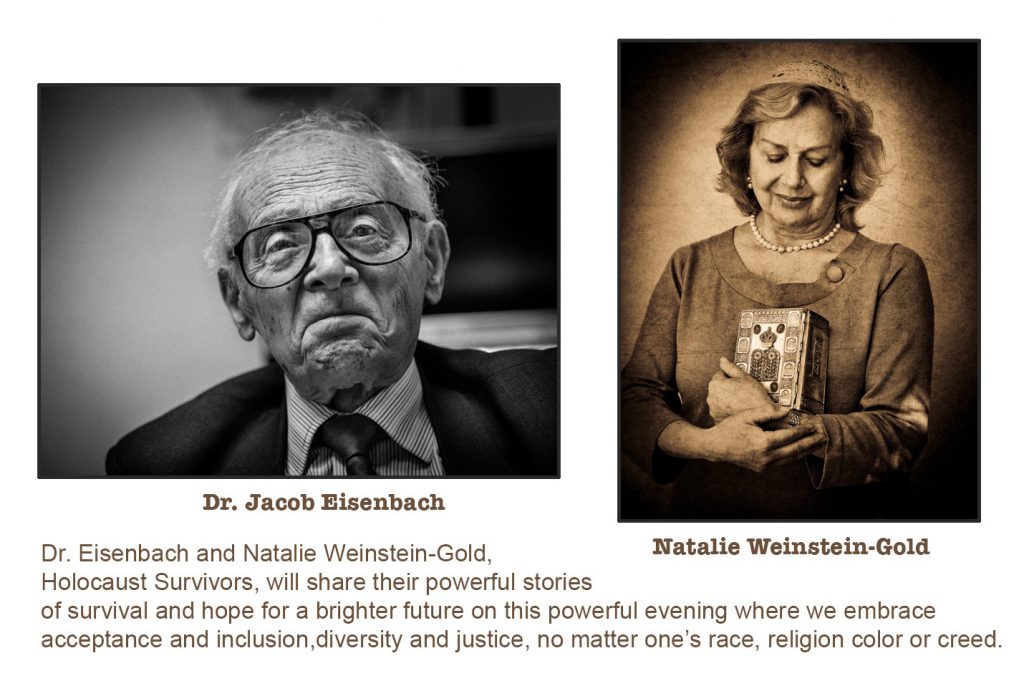 The remembrance takes place adjacent to the campus pond on Wednesday, May 4, 2016, from 7-8:30 p.m. Admission and parking are free and the event is open to the public. Cypress College, located at 9200 Valley View Street in Cypress, CA.

Holocaust survivors Dr. Jacob Eisenbach and Natalie Weinstein-Gold are the featured speakers. They are among the five or six survivors of the Nazi Holocaust who will be honored at the event, along with two children of survivors.

Cypress College’s tribute is also centered around an exhibition of haunting and spirit-filled portraits of survivors photographed by Cypress College Professor Clifford Lester. Professor Lester’s portraits of Holocaust survivors were exhibited during an all-faculty meeting at the start of the school year. The work was so well received the photographs are now displayed in the campus Student Center. At one time facing extermination, these survivors now express determination to keep the memories of the Holocaust alive. The portraits create an enduring voice for the survivors, a voice that speaks out against hatred, injustice, stereotypes, and anti-Semitism. Among Cypress College’s core values is “inclusiveness” and the college’s Diversity Committee agreed to hold a Yom HaShoah event in this spirit.

Yom HaShoah is the annual Holocaust Remembrance Day for the six million Jews who were murdered by the Nazis during World War II. This year it begins at sunset on Wednesday, May 4 and concludes at sunset on May 5. Cypress College pays respect with a ceremony that promotes acceptance and inclusion, diversity and justice, no matter one’s race, religion, color or creed. This message will be accentuated by Cypress College Dance students, who will present an original interpretive performance interconnected with music and photography.

The lighting of memorial candles is part of the Yom HaShoah tradition. Four of the Holocaust survivors and two children of survivors — including a Cypress College employee — will represent the six million Jews who were murdered during the Holocaust. Lit candles will then be floated onto the campus pond.

At 93 years old, Dr. Eisenbach recently retired from dentistry after practicing for 60 years. Dr. Eisenbach and his family lived in Lodz, Poland. Before the war broke out, Dr. Eisenbach lost his mother to illness. After Poland was invaded, he lost his sister, father and youngest brother at the hands of the Nazis.  Despite all of these losses, Dr. Eisenbach retains his strength by remembering his parents’ words, telling him “to never lose hope for a better tomorrow.” As a result, Dr. Eisenbach is quick to state he has never lost his faith in humanity.

At the age of 18 months, Natalie Weinstein-Gold was left on the doorstep of a lawyer’s house with a cross around her neck in the hope that this would save her life during the war. Four and a half years later, she was found at a convent by her father, a Warsaw Ghetto fighter named Leon Weinstein. Ms. Weinstein-Gold, now a psychologist, shared many Sabbath dinners with her father after coming to the United States in 1952.

Sarah Schweitz was born in Trikala, Greece. When her father was captured during World War II by the Germans, he was threatened with his death by the German Commandant of a Detention Camp. When asked why his life should be spared, he showed the Nazi a picture of his 31/2 year old daughter and said she was waiting for him to come home. Reminded of his own daughter, the German spared Sarah’s father’s life and let him go.

Harry Lester, father of Cypress College Photography Professor Clifford Lester, was formerly named Horst Littwitz, until coming to the United States on the Italian Ship Vulcania. Faced with harassment from the Nazi’s as early as 1933, Mr. Lester survived the first part of the war despite events such as the trashing of the synagogue where his bar mitzvah was to be held. Mr. Lester migrated to the U.S. with his mother in November of 1939. His father Max  was left behind because of U.S. quotas limiting immigration from Poland. Fortunately, they were joined by his father a year later.

David Langer is the son of Nathan and Mira, both Holocaust survivors. They immigrated to the U.S. after World War II. Nathan, who grew up in a family of wine makers, later founded Langer Juice Company. A native of Krakow, Poland, he was the only survivor of his immediate family.

Rick Van Beynen, a Cypress College employee, is the son of Rachel (Kops) Van Beynen, who was born in Amsterdam in 1926. Ms. Van Beynen was the first person in the family to be taken by the German SS at age 16. She ultimately survived 10 concentration camps — including a death march from Auschwitz, when the Germans knew they were losing the war. After the war, she learned that her mother, father, sister, brother, grandparents and 53 other family members had been exterminated.

Cypress College has motivated the minds of students since 1966. For nearly a half-million people — including actors, athletes, doctors, executives, mechanics, nurses and teachers — Cypress College has been a springboard to their dreams. For some, Cypress College is the ticket into their university of choice. For others it provides essential training for a rewarding career. Just one Cypress College class is often all it takes to provide cutting-edge skills that lead to a promotion or a new job.

Cypress College’s 16,000 students and its highly qualified teaching faculty are proud of its many excellent academic and vocational programs. Cypress College offers 56 university-transfer majors, 164 career-certificate programs, and degrees in 71 areas of study. The College’s traditional semesters begin in January and September, while short-term courses start throughout the year. A Cypress College education costs $46 per unit — $138 for a typical, full-credit class — California’s lowest higher education tuition. Financial aid and scholarships are also available to qualifying students.

Located at 9200 Valley View Street in Cypress, the College is easily accessible from several Southern California freeways, including the 5, 91, 605, 22 and 405. The campus is just a stone’s-throw from Downtown Disney and Knott’s Berry Farm.

More information about Cypress College is available by calling (714) 484-7000 or by visiting the campus website at cypresscollege.edu.