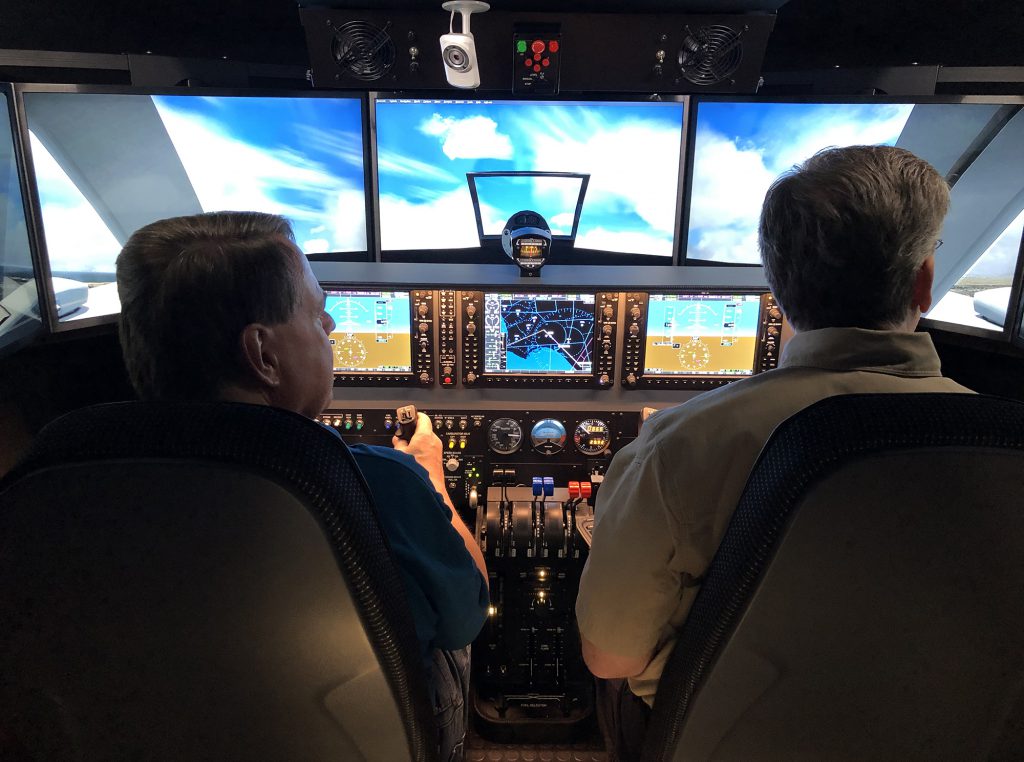 Cypress College is home to a full-motion, twin-engine flight simulator.

The Twin-Engine Reciprocating & Turbine Motion Simulator enables Cypress College instructors to train aspiring pilots for their initial private pilot certificates. This on-the-ground training saves students between 30 and 60 hours of flight time, equating to a savings of $7,500 to $15,000.

“This new simulator will enhance the training we’re able to provide students,” said Cypress College President JoAnna Schilling, Ph.D. “It dramatically reduces FAA required flight training times, providing our students with an economical path to the completion of their flight program. We couldn’t have made this purchase without the donation we received from an anonymous donor last year.”

Last October, Cypress College was the recipient of the largest individual gift in campus history when an anonymous donor provided a $1 million donation to the college’s aviation program. The donation was earmarked to transform Cypress’ state-of-the-art flight simulator lab into the region’s best public facility, support Cypress’ flying team, and be used toward the purchase of an airplane. In addition to the new Twin-Engine Reciprocating & Turbine Motion Simulator, four FAA certified simulators will soon be installed to better enhance the attainment of technical skills and increase student completion rates. The five simulators are part of the ultimate plan for the Aviation Lab to include eight flight simulators, with one slated as a full-motion multi-engine turbo-prop simulator. The college is home to a unique simulator that mirrors the recently released Boeing 737 Max commercial jet.

Cypress College offers students a pathway to their future in an environment in which employees commit to joining students on their educational journey. The college’s half-million-plus alumni include actors, athletes, doctors, executives, mechanics, nurses, and teachers. For some, Cypress College is the ticket into their university of choice, and for others, it provides essential training for a prosperous career. Just one Cypress College class is often all it takes to provide cutting-edge skills that lead to a promotion or a new job.

Cypress College’s 16,000 students and the highly qualified teaching faculty are proud of the many excellent academic and vocational programs. Cypress College offers 56 university-transfer majors, 176 career-certificate programs, and degrees in 73 areas of study. The college’s traditional semesters begin in January and August, while short-term courses start throughout the year. A Cypress College education costs $46 per unit — $138 for a typical, full-credit class — California’s lowest tuition. Financial aid and scholarships are also available to qualifying students.