Blackmarket Bakery owner Rachel Klemek can work under pressure. She runs three bakeries, has four kids, and counts herself as a former Hotel, Restaurant & Culinary Arts faculty member of Cypress College. And now, she can call herself a “Chopped” episode champion and season finale runner-up.

We asked her a few questions about her experience. She offered an inside glimpse of the popular cooking competition show, as well as some sound advice that works in and out of the kitchen.

How did you get involved in being on the show “Chopped?”
Back in October of 2018, I received an email from a casting company requesting that I apply to “Chopped.” At that time, I hadn’t seen more than a few snippets from “Chopped” over the years but thought I should just give it a try anyway. My family strongly discouraged me, given how challenging it looked. Being an optimist, I filled out their app online and submitted a few videos of myself baking. A Skype interview and a more in-depth phone interview followed. Even then, I didn’t think I would get cast. Then, a producer called to schedule my “bio-pack,” where a crew filmed in the bakery location. But the producer warned that nothing was decided. Then, three weeks before the first episode filmed, they emailed to say that I was cast in a dessert episode and needed to get to NYC! I memorized and tested as many “fast” recipes as possible, not knowing what kinds of desserts I would be making.

At the start of the “Sweets Showdown: Cake” episode, you said your philosophy on the show was to “Keep Calm and Cake On.” Is this your motto for everyday life, too?
I think I came up with that on the spot, at the producer’s prompt to have a tagline. But in essence, I aspire to follow that advice. Freaking out about stuff is not productive, but sometimes it still happens! 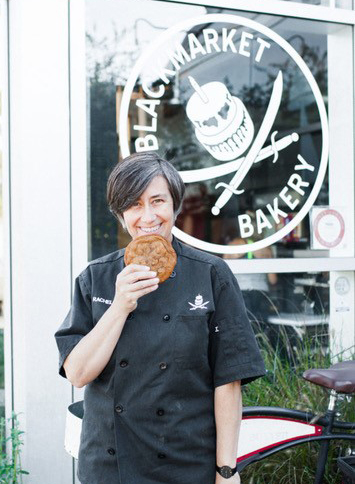 You called one of the judges on the show, Sylvia Weinstock, a legend. Did that make you more nervous?
The whole process of filming was completely nerve-wracking, but I don’t know if any particular judge made it any more so. Sylvia Weinstock was a trailblazer in exquisite sugar flowers and incredible tiered cakes, so I was familiar with her stature in the industry but decided that being overly intimidated would be a handicap so tried to act as normal and confident as possible.

Squid-ink toffee — what inspired you? It was very popular!
Toffee is basically sugar, butter, water and a bit of salt. Since the salt is necessary to balance the sweetness, the saltiness of the squid ink seemed like it would work well. My mistake was adding the squid ink before the toffee was completely cooked, since I relied on the color to tell doneness. Luckily, I was able to guess when the toffee reached temperature (before burned and turned bitter) by the bubbles. Plus seafood and butter made sense to me!

You said the other contestants’ Bundt cakes were simpler. Do you think your more complex take helped you?
I think substituting the tomato soup as part of the liquid in the cake was the key to my surviving that round. Adding ganache and caramel, which seemed like a good idea for a dessert, was perceived by the judges as going overboard…

What did you win for being the best chef of that episode?
For winning the Chopped Cake episode, I won the chance to go back and compete in the Sweets Finale. And the ability to claim that I am a Chopped Champion. That’s it!

For the finale, the pressure seemed stronger. And did the ingredients seem weirder?
The ingredients were pretty weird in all six of my rounds (in both shows), but in every round there were at least two items that were easier to address. With Martha Stewart judging and that $50,000 on the line, the pressure was more intense in the finale.

It appeared as if the closer the show drew to the end, the more camaraderie there was among contestants. Did you feel that way?
Not particularly. In between rounds, there was a minimum of conversation between contestants. We were all coping with a very stressful situation together, but since we were still in it, I think we all kept pretty focused and to ourselves.

What was the most intimidating/challenging thing in that episode? What was the best?
Making a dessert to flambé was really tough for me. A new experience! I considered using the cotton candy machine but hadn’t done so before and didn’t want to count on it without any prior experience. The high point was making desserts for Martha Stewart and hearing positive feedback. One of my favorite cookbooks as a young baker was Martha Stewart’s Pies and Tarts, so I am a huge fan!

You got good feedback on your flavor. And your flambé looked so pretty! Judge Alex Guarnaschelli said you are “such an unbelievable baker.” Is that how you were able to walk away saying you were “feeling like a winner for sure”?
Going into the whole “Chopped” experience, I had no expectation of getting through even one round. So winning one episode and being the runner up in another constitutes a big accomplishment in my view. Being a business owner, I spend lots of time on office stuff like marketing, hiring, accounting, scheduling, etc and not much in the kitchen anymore. So I was proud to have gotten as far as I did!

Is there anything you learned from the experience that you might bring back to your students?
My take-away from filming two “Chopped” episodes is:
1. Practice, prepare, and be as ready as possible (for life, for baking, for anything)
2. Trust your instincts
3. Do work you are proud of
4. Remember to have fun and not take yourself too seriously