For over 50 years, Cypress College has occupied a gorgeous location in the greater Orange County area where it resides. The campus itself is a beautiful mix of original architecture and contemporary design that wrap around a central pond where students, campus employees, and visitors alike can sit, study, ponder, and reflect.

Busy passersby may not notice the two smaller, unassuming trees that neatly grow on either side of the Cypress College pond. What the camphor tree and ginkgo biloba tree represent, however, were two women whose impact on the college simply could not go without recognition.

The ginkgo biloba tree was planted in 2002 in honor of Dr. Dorothy LaLonde Stout, longtime geology faculty member at the college who died in September 2001. On the northwest side of the pond, a camphor tree, planted in 2013, looks out to the pond, memorializing Dr. Kimberly K. Bartlett, the late director of Disability Support Services (DSS) at the college. Both trees survived the recent reconstruction project of the pond, according to Phil Fleming, director of Physical Plant and Facilities at the college.

“These trees survived significant pond refurbishment,” Fleming said. “What’s even more interesting, perhaps, is that these trees not only survived the construction, but now appear to be healthier than ever.”

DSS Counselor Deborah Michelle remembers Bartlett well. Her sense of humor is what she thinks back on most. But what made her special, Michelle said, was her determination to make a better world for people with disabilities, especially the students on her campus.

“I think she would be impressed with how much further the campus has come in regards to accessibility for people with disabilities,” Michelle said. “Cypress was then, and is now, in a constant pursuit of a truly accessible campus.”

Marylou Garibaldi, DSS student services specialist, remembers her similarly, calling her the “nicest person you could ever meet.”

“She was truly an inspiration,” Garibaldi said. “I think she would love to see how much the campus has changed and how Disability Support Services is becoming more prominent on campus. I miss her dearly.”

Due to Dr. Bartlett’s advocacy, the campus was prompted to incorporate more accommodations, including automatic opening doors on the main buildings, electronic buttons to open doors, and more. She served at Cypress College from 2000 until her death in 2013.

Stout’s memorial tree tells a different story. Under the ginkgo biloba tree, a plaque with a quote attributed to her reads, “It is an awesome challenge to play a part in the lives of students and help them be more productive citizens.” 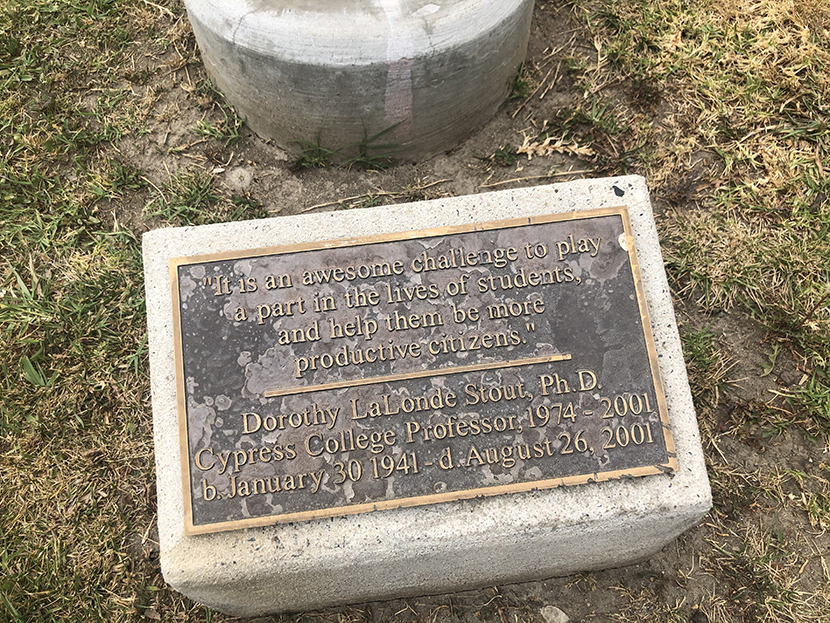 Stout, a long-time faculty member, dedicated herself to Cypress College and its students from when she was hired in 1974 until she retired in 2001. Her colleagues remember her as an academic who was absolutely committed to the advancement of her field, and educating the next generation of future scientists. She served as the National Science Foundation’s program director for undergraduate education. She was widely respected in her field, and was even named the 1996 Orange County Community College Teacher of the Year.

Her field recognized her contributions as well. She was awarded the 2001 Excellence in Geophysics Education Award by the American Geophysics Union. She served as president of the National Association of Geology Teachers’ (NAGT), which now gives a namesake award in her honor.

Cypress College President Dr. JoAnna Schilling said the trees serve as a reminder to all who work at the institution what it means to “truly serve students.”

“Dr. Stout and Dr. Bartlett gave immeasurably to our college and students, and these trees are a fitting way to memorialize them both,” she said. “They were both strong yet gentle individuals who were always advocating for a higher calling to serve the students who needed them. Their legacies will not be forgotten.”

To learn more about the National Association of Geology Teachers and the Dr. Dorothy Stout Professional Development award, visit nagt.org/nagt/awards/stout.html.

Cypress College offers students a pathway to their future in an environment in which employees commit to joining students on their educational journey. The college’s half-million-plus alumni include actors, athletes, doctors, executives, mechanics, nurses, and teachers. For some, Cypress College is the ticket into their university of choice, and for others, it provides essential training for a prosperous career. Just one Cypress College class is often all it takes to provide cutting-edge skills that lead to a promotion or a new job.

Cypress College’s 16,000 students and the highly qualified teaching faculty are proud of the many excellent academic and vocational programs. Cypress College provides a pathway for each of our students, offering 56 university-transfer majors, 174 career-certificate programs, and degrees in 98 areas of study. The college’s traditional semesters begin in January and August, while short-term courses start throughout the year. A Cypress College education costs $46 per unit — $138 for a typical, full-credit class — California’s lowest tuition. Eligible first-time students qualify for free tuition through Cypress College’s Charger Experience promise program. Financial aid and scholarships are also available to qualifying students.

In response to the global COVID-19 pandemic, Cypress College’s instruction and services are offered primarily in a remote format. Students can access support services online at cypresscollege.edu/coronavirus.