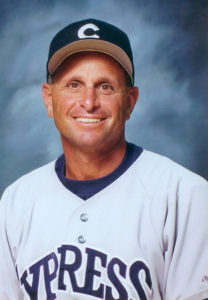 Cypress College Head Baseball Coach Scott Pickler is a bit of a legend when it comes to community college baseball.

However, the most interesting thing about Pickler and his legendary 25-year career as a baseball coach with Cypress College, is that it only tells half the story of his overall coaching success.

During the summer months for the past 24 years, Pickler packed his bags and headed to the East Coast, where he manages the Yarmouth-Dennis (Y-D) Red Sox of the Cape Cod Summer Baseball League (CCBL) – a summer development league for college baseball players – where he recently became the winningest manager in CCBL history.

You read that correctly: Not only has Coach Pickler simultaneously etched his name into the annals of historical success for the Cypress Chargers baseball team, but he did it for a baseball team on an entirely different coast.

“Pick” reached that milestone with a 5-3 victory on June 25 over the CCBL’s Cotuit Kettleers.

His history with the Cape Cod league began like most of Coach Pickler’s endeavors: with immense humility.

And much like his West Coast successes, his East Coast triumphs were far more than just stacks of wins: Teams that Pickler managed went on to win six Cape Cod League Championships and five regular-season East Division titles.

Pickler’s CCBL legacy includes seeing more than 115 of his players picked in the Major League Baseball (MLB) draft. Although several were fortunate enough to have moved on to pro ball, his influence always seems to positively affect every player that comes through Cape Cod AND Cypress.

“I do the same things as a coach in the cape that I do here at Cypress College,” said Pickler. “And watching all of the players make those adjustments is so rewarding; it’s just really a neat thing.”

New England summers for the past 24 years have felt like a second home to Pickler, and he stays largely involved in the Cape Cod community. When he and his players are not at practice or a game, you can find them running a youth baseball summer camp.

“The Cape Cod community is so incredible,” said Picker. “Being here and coaching really brings baseball back to the old days.”

Back in California, those within the Cypress College community know that Coach Pickler embodies all the attributes of a good coach: he is knowledgeable, confident, and encouraging to his ballplayers. His attitude toward baseball is contagious and shows through each player he has trained, and that also comes through as incredibly valuable to the Cypress College community.

And of course, Coach Pickler is enamored by what he does and feels that every day on the field with his players is an absolute dream.

“As they say, ‘choose a job you love, and you’ll never work a day in your life,’” he added. “I wholeheartedly feel this way, and I’m just out here to keep my players loose and have fun.”