Cypress College is remembering retiree Colette Johnson, one of the campus’ initial cohort of employees who helped open the new campus in 1966. Johnson was an administrative assistant with a passion for serving students and participating in campus events where she cheered on those who represented the college.

“Colette was active in supporting the Business (Division) students, representing and participating in activities and connecting with the students,” said Deann Burch, a long-time colleague of Johnson. “Those of us who worked under the direction of Don Bedard learned day one: serve the students well. And, this is what Colette did — she cared about the students, knew their names, majors, and supported them throughout their experiences at Cypress.” 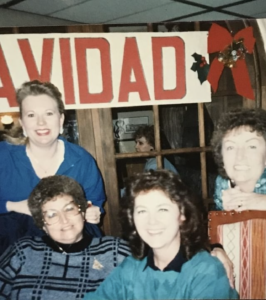 In retirement, Johnson served on the planning committee for Cypress College’s 40th anniversary.

Johnson was the spouse of basketball coach Don Johnson. They were married 67 years at the time of his passing in 2019.

“She, obviously, was heavily involved in the basketball teams and supported Don Johnson in so many ways,” Burch said.

A 1996 LA Times article noted that upon his retirement, Don thanked Colette for her support. Specifically, he recognized her for advocating on behalf of several players he considered removing from his teams.