Mark Eaton’s path to a record-setting NBA career could have been a Hollywood script. But, dig deeper and it also accurately depicts the role of community colleges: an instructor sees possibility and sets a student on a path they never expected. Eaton — the college’s 2004 Alumnus of the Year, the Cypress College Foundation’s 2014 Americana Man of the Year, and a member of the Chargers Athletics Hall of Fame — died on Friday. 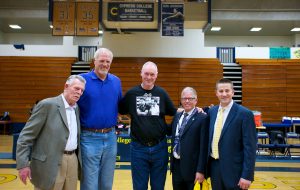 “Eaton played above the rim and all plausible dreams,” columnist Mark Whicker wrote in yesterday’s edition of The Orange County Register.

Eaton frequently shared the story that brought him from the tire shop at the corner of Lincoln and Knott to Cypress College, where he learned to play basketball. While driving past what’s now Just Tires (but was then Mark C. Bloome), Chemistry Professor Tom Lubin saw a tech looking in the window of a car — that was raised on the auto lift. Lubin, an assistant coach on the basketball team, swung back to the shop and began recruiting the 7-foot-4, 21-year-old who hadn’t been a basketball player at Westminster High.

In fact, he said he didn’t even like the sport.

But, Lubin and Cypress College Head Basketball Coach Don Johnson saw possibility. And, from there, the sky became the limit. He went on to UCLA and then the NBA, where he helped transform the culture of the Utah Jazz into a winning organization.

Eaton was part of Cypress College’s 1979-1980 state championship team. He transferred to UCLA, where he played, his bio says, “just 53 minutes in a total of 11 games” during his senior year.

That number later graced his Utah Jazz jersey and now hangs in the rafters after his #53 was retired by the franchise in 1996, the fourth player so honored by the team. His number #35 jersey was retired by Cypress College in 2014 during the first-ever Legends of Hoops night.

The Cypress community is heartbroken by the passing of Cypress Hall of Famer and NBA All-Star Mark Eaton.
Our thoughts and prayers are with his family and friends during this difficult time. pic.twitter.com/tVXFwZmojl

Eaton was drafted by the Jazz in 1982 and spent his entire 11-year NBA career with the team. He still holds the record as the NBA’s best shot blocker as well as for most blocks in a season. Twice, he was the league’s defensive player of the year. An NBA All-Star, Eaton is fourth in league history with 3,064 blocked shots, a category he topped in four different seasons.

Following his playing career, Eaton remained in Utah where he worked with at-risk kids, partnered in a restaurant, did TV work for the Jazz, became the president of the NBA’s retired players union, and hosted a nationally syndicated radio show.

He remained in Utah where he enjoyed the outdoors, “especially fishing, mountain biking, and golfing,” he said. It was while mountain biking on Friday night that Eaton apparently had a fatal accident, according to the Jazz.

In 2008, Eaton became a motivational speaker — and, Lubin again played a role in shaping his student’s future. As they struggled to articulate his story, Eaton’s speaking coach reached out to Lubin, according to the Salt Lake Tribune. Lubin identified keys to Eaton’s basketball success — “he knew his job, he did what he was asked, he protected people, and he unselfishly embraced making others look good” — the Tribune article noted. This became the foundation of Eaton’s message, Four Commitments of a Winning Team. 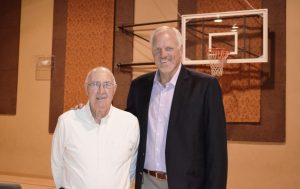 When Professor Lubin passed last summer, Eaton authored a tribute titled “Today I lost my Coach,” and he graciously shared his words for Cypress College’s remembrance:

“In his wake he leaves legions of doctors, researchers and scientists who wandered into his Cypress College chemistry classes thinking, ‘I hope I can pass this course.’ They left inspired, by a man who would not let them fail. … He was committed to helping everyone he met find their potential.”

Undoubtedly, Mark Eaton was one of those alumni. 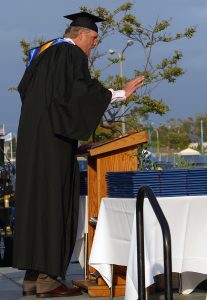 Cypress College Alumnus of the Year Mark Eaton, an NBA record holder, received his award during the graduation ceremony on Tuesday, May 25, 2004.