The Way of Tenderness: A conversation with Zenju Earthlyn Manuel 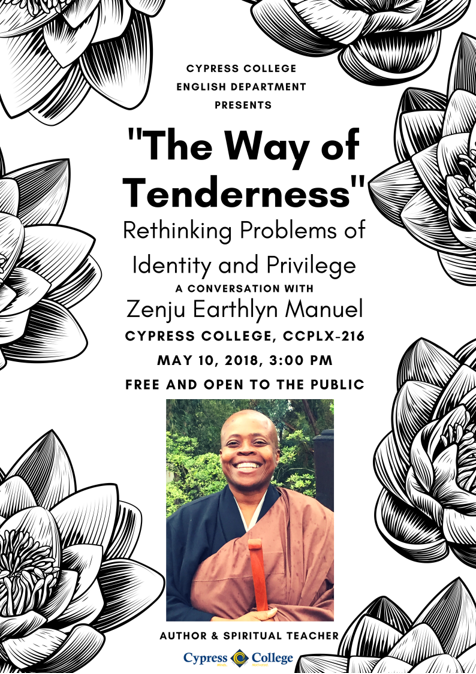 The Cypress College English Department presents this lecture in CCCPLX-216 with Zenju Earthlyn Manuel, a Zen Buddhist priest, author, and artist. Free and open to the public.

How do we move beyond the rage, anger and disappointment that occur when we think about the problems of identity and privilege that arise in our classrooms and society at large? Manuel will use the ideas from her book, The Way of Tenderness( 2015), to argue that the answer to this question is not to act as though everyone is the same. Acting as though we don’t see difference ignores the physical, bodily contexts in which moods such as rage, anger, or disappointment (which may be tied to race, sexuality, gender, class, etc.) exist. Rather than nonidentity, Manuel will argue the relevance of embodied identity in the face of oppression and hatred. She will show that it is by recognizing distinct accounts of life and acknowledging the tenderness that comes from not only compassion and love but also from pain and suffering that the body becomes “the location of awakened experience.” (adapted from PW review, 1/2015)