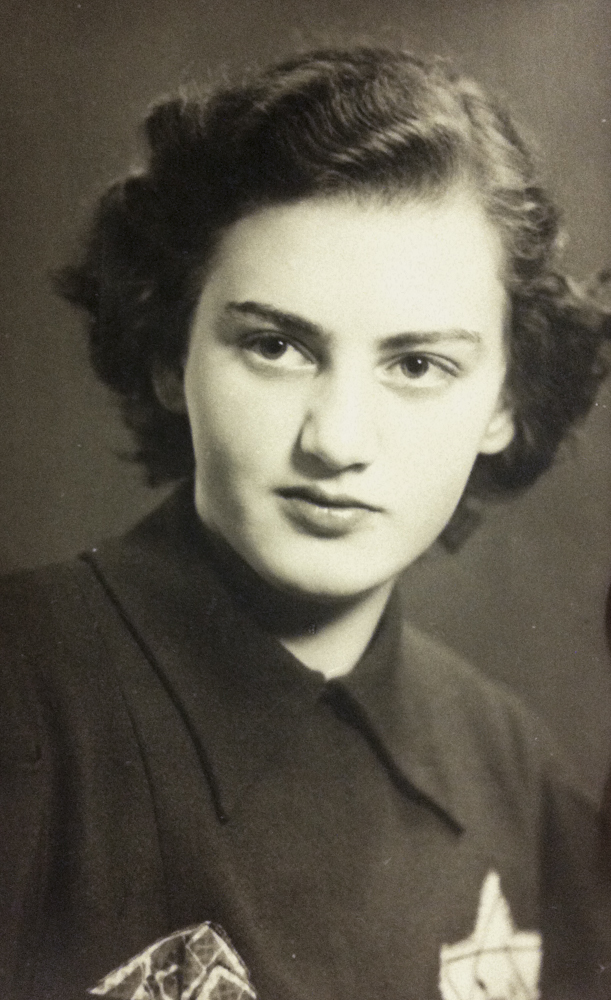 Ursula Lowenbach (at that time) with Yellow Star.

“Life is not made of years….Life is made of moments. It is the moment, that illuminates or darkens your life. The sum of the moments is the sum of one’s life.”

Ursula Lowenbach Foster impacted the lives of the many students she shared her story with, and her journey to make a difference continues today in a legacy that will live on forever. In our mother’s honor, my brother and I have established the Ursula Foster Holocaust Memorial Scholarship, in order to inspire students to learn more about discrimination and adversity, so that through the voices of our children, the world will never forget.

Ursula Lowenbach Foster, a Holocaust survivor and former classmate of Anne Frank, fled Germany, and moved to Amsterdam in 1938 when she was 11, to escape Nazi persecution. Two years later, Germany conquered the Netherlands, and brought the same persecution to Ursula’s new home. In 1942, that persecution took a dramatic turn for the worse when Ursula’s older brother, Ernst, at age 18, was sent by the Nazis to Auschwitz Concentration Camp in Poland, where he was murdered in the gas chambers.

In order to avoid a similar fate, Ursula and her parents went into hiding in 1943. For nearly two years, they lived secretly in an overcrowded house with 14 other Jews, all hidden by a merciful Dutch family. For one of those years, all 16 of the guests were forced to sleep in the dirt underneath the house — among the crawling insects and rats — in order to escape detection by the Nazis. It was a devastating, humiliating manner of existence, the horrors of which few of us could ever truly grasp. And though it would have been much easier to let the memories of those days fade forever, Ursula spent many years before her passing courageously doing just the opposite.

As a way to honor her brother Ernst, and for the betterment of the world, Ursula did her best to keep the memory of the Holocaust alive, so that such a terrible thing would not happen again. Although very shy, she gave her time and shared her experiences to many school children at schools here in Modesto, giving talks about the Holocaust and its horrific impact on her life and those of her family and friends. She wanted children to know how precious freedom is, and that we can’t take it for granted. We must learn from the past, she said, about “what can happen if prejudice and hatred are allowed to run wild.”

History is the result of choices made by people at a particular time. The Holocaust occurred because individuals, groups, and nations made choices to act or not to act.

Ursula Lowenbach Foster survived the Holocaust because of the choice made by a courageous Dutch couple. They secretly hid Ursula, her parents, and 13 other Jews in an overcrowded house in Amsterdam. After barely escaping detection by the Nazis and spending a year sleeping in the dirt underneath the house among the crawling insects and rats, Ursula and the 15 other Jews were liberated by the Allies in 1945.

Later in life, Ursula displayed her own courage by overcoming her shy nature to share her terrifying experiences with innumerous children at many different schools.

Ursula had a tremendous impact on the lives of those students, teaching them what can happen “if prejudice and hatred are allowed to run wild.” This scholarship is a testimony to the legacy Ursula created.

A $500 scholarship will be presented to the top entry in each of the following categories:

Written Prose
May include essays or poetry.

To be eligible for the scholarship, submit an entry following the instructions contained in this document. All entries will be reviewed by the Scholarship committee and prizes of $500 will be awarded to the top finisher in each college and high school category.

Step One: Research or interview a Holocaust survivor, witness, or rescuer.

Step Two: Based on what you have learned from your research in Step One, choose a topic for your submission from one of the following themes:

Step Three: Choose to submit your presentation in one of the presentation formats indicated below. Only one entry per person.

Written Prose – May include Essays or Poetry. Essays must be between 500 to 750 words, original poems 750 words or less. Please indicate word count on submission.

Submissions will be evaluated based on the following criteria