A summer trip to Yellowstone National Park results in “advice from nature” and inspirational messages shared by the President. 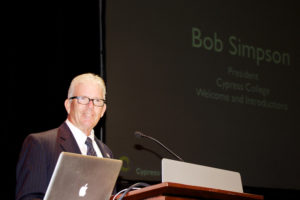 Dr. Bob Simpson delivers his State of the College remarks during the all-employee Opening Day meeting on Friday, August 22, 2014.

Opening Day featured a presentation by Cypress police officials about preparing for and responding to an active shooter situation. The sobering but important message was the centerpiece of the campus-wide meeting, which then closed with an inspirational tone as Dr. Simpson shared some “advice from nature.”

Prompted by a visit to a Yellowstone National Park gift shop, the “Advice from Nature” segment included suggestions from a bear — such as “look after your honey” — and other animals and features found in the park. A hummingbird advises to “keep your visits short and sweet,” a hot spring suggests “keep new ideas bubbling up,” and the campfire offers “spark new ideas.”

In that spirit, Dr. Simpson told employees that this period in the college’s history provides a unique opportunity for change, growth, and innovation. It is a time to consider ideas employees feel strongly about and to enact them. 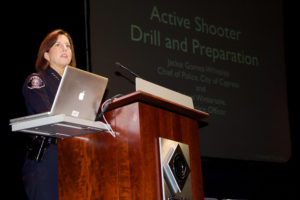 While the meeting closed on this high note, the college was focused upon a presentation by Cypress Police Chief Jackie Gomez-Whiteley and Lead Police Officer Michael Wintersole about how the College’s employees need to react in the event that someone opens fire on the campus. Wintersole, a first responder to the 2011 shooting at Salon Meritage in Seal Beach, underscored a three-point response strategy: 1) get out; 2) if that’s not possible, hide out; and 3) if left with no other option, fight back. 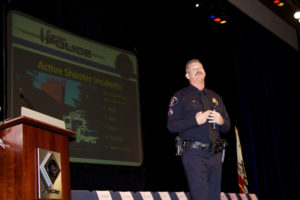 On that last point, Wintersole emphasized that once you make that decision, it is critical to give it your all. He also informed employees of the critical need to comply instantly and fully with responding officers’ commands. Every second spent responding to questions from staff is another moment that the shooter is on the loose. Wintersole also told employees that it is important that their hands be visible and their fingers spread apart when approaching officers — a clear indication that there is no threat.

To begin the meeting, Dr. Simpson also introduced 30 new employees, the largest group since the same number were hired in the 2008-2009 academic year.

Chancellor Ned Doffoney and NOCCCD Board of Trustees President Jeff Brown gave greetings from the District.